Custom designed armour-fitted vehicles are seeing a boom right now. Clients are looking to protect their transport fleets carrying not only cash, but also high value goods, such as oil, gold, and the latest technology, as well as protection for embassy staff.

Ramor protection steels: the toughest in the world

Whether for the construction of a sensitive building, or the design and manufacture of defensive vehicles, you need a steel that can meet and exceed protection parameters. SSAB has been at the forefront of protection steel research, development, and manufacturing for more than 50 years. One of the toughest products is the Ramor® range of steels with a single purpose: to protect human life. Its technical specifications and performance lead the market, and it is a favoured material used by non-military and military armoured vehicle and buildings like banks and embassies. This factsheet provides details of Ramor® 500 and Ramor® 600, and some real-world applications.
By Armox 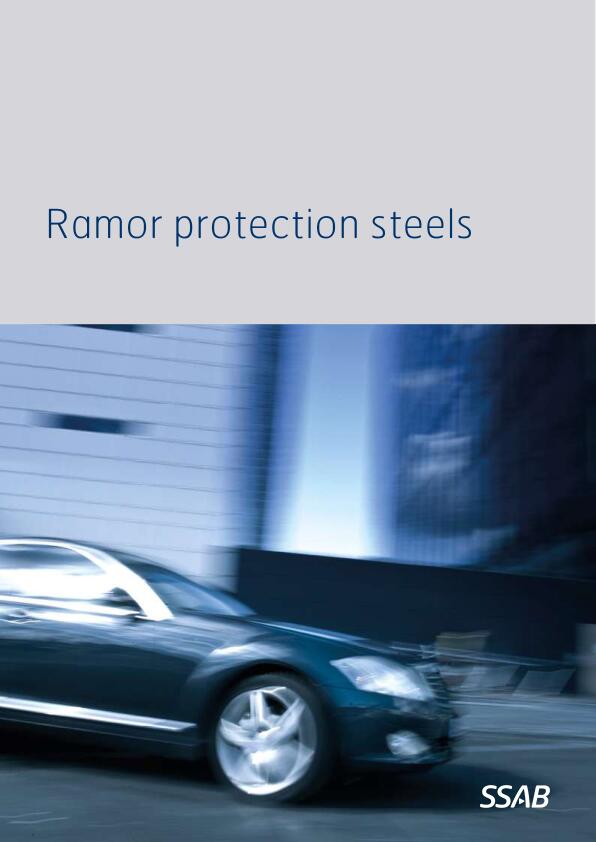 Thank you. Please check your email to download the Factsheet.

Protective steel grades have developed over the years, with armoured plate now half the thickness needed 30 years ago yet retaining the same level of safety. This is especially important for armoured vehicles when using armour steel to protect them against penetration or blast forces. Protective performance needs to be achieved without making the vehicle excessively heavy.

Ballistic Armor Technologies (BAT) on the outskirts of Johannesburg, South Africa, exclusively uses SSAB steels for their projects. BAT was formed 30 years ago, but has grown significantly over the last ten years, supplying armoured vehicles for cash transporters SPV, Fidelity and G4S. Other customers include the French police force, but most customers are based in Africa.

Boasting 100 employees and a manufacturing facility of 700,000m2, BAT currently produces about 20-25 vehicles a month, with a total of around 2000 cash-in-transit vehicles for customer fleets in the country. Starting with an original design, BAT works with its customers to find out what their exact requirements are, which are then converted into a mechanical design based around SSAB steel. BAT also provides full security software and hardware development in-house. Fabrication, cutting, welding, and painting are all completed in-house, then the parts are moved into BAT’s assembly hall for installation on the vehicles, with the chassis supplied by the clients.

Kerlen says SSAB can supply all of BAT’s needs due to the extensive range of steels they have. For ballistic protection it is the hardness of the steel that matters: “It’s quite complicated. Every single bullet works differently. The way that it can punch through or splatter steel. So, it’s a very specialised type of steel. We use various grades from them, from different hardness to different thickness. We even use some of their ‘normal’ products in some of the structural applications that we have…across the range. Basically, all their armoured steels.”

“I think the specialised nature of SSAB also ties in with our specialised business. Their armoured division, their speciality steel division, is quite specialised and so are we.” Kerlen says that this relationship means he can speak to SSAB experts in Sweden whenever he needs to, but SSAB also have a local branch, with stockholding and sales reps, which he says is extremely convenient and helpful.

As BAT works exclusively with SSAB steels every day, they need to be confident that its quality is consistent, and that the steel is also easy to work with.

“You need to weld it. You need to bend it. You need to cut it,” points out Kerlen. “And the SSAB stuff is good. You know it’s consistent, the quality is high. Tolerance is always on the positive side – they don’t take chances with it. You know if it’s supposed to be 4 millimetres and [sometimes] its 4.1 or 4.2. You will always see that it’s 10% over the actual required thickness. They’ll test the ballistics at the lowest level, and they will always make sure that their production tolerances are always on the positive side. It gives a bit of confidence for ourselves and our clients to know that the product is going to do what it’s supposed to.”

Working with the steel is also a positive experience says Kerlen: “When you bend it – it always performs brilliantly. We’re very happy with this steel.”

Unfortunately, in South Africa, as in other places around the world, ex-military weapons are used by criminals to attack vehicles, with doors being opened by blasting. “Currently in South Africa, and I think also in Europe to a lesser degree, we’ve got a lot of problems nowadays with blasting,” explains Kerlen. “[The criminals] actually blast the vehicles open instead of shooting them.”

Kerlen says that while the ballistics part of the armour protection is working well, it is important to note that South African weapons are different than the ones that most international standards are set for: “We have slightly different weapons here, and some of them punch a lot harder than say American weapons or European weapons. So, we’ve had to do our own testing here and make sure that the steels are compatible. There are internationally recognised standards, but we’ve got our own standards here that that we keep on ballistic levels, due to the quite potent weapons that are available – old military weapons.

“We make sure that we can specify the steels which are required for the South African weapons versus European or international norms. We’re confident in what the steel can do. However, now with the blasting, that brings it to a totally different level. You must make sure that the vehicles are able to resist blast. How does it perform under blast? So that’s really the challenge we’ve had for the last four or five years.”

BAT has been working in partnership with both the local police and SSAB to examine different steels to resist blasting. “We’ve done a lot of blast testing here locally with the police and trying different steels out. And I think we found some good formulas, and that’s also been with the input from SSAB and the blast specialists that they have. Specifically, in Finland and Sweden, so it’s been collaborative,” says Kerlen. “We show them the results and say, ‘that’s great. Look at that. Look at this. Maybe that could be better. Maybe that thickness? Maybe that’s up to design.’ And we’ve been very successful in South Africa, to try and mitigate the blast threat.”

Kerlen says that unfortunately, he sees blasting as a trend: “These are career criminals that would be attacking these vehicles so they would move to stealing cigarettes or cell phones. I think that’s the one trend that we’re going to be seeing. Blasting is obviously a new trend, and it’s not going to stop in South Africa. And there are also things that would go outside of our business model, like embassies or corporates that might be a bit more wary in future, due to global terrorist threats, [which are] going to need high levels of protection.”

For BAT, looking forward Kerlen is contented with his current strategy of steady growth. “I implemented a strategy about four or five years ago, which we are still busy with at this stage. We’ve grown quite dramatically, and we’ve come up with some solutions from a technical point of view for blasting. I think that’s our next big challenge – to perfect that and to expand that into different products.

“We’re still well into our strategy, which incorporates growing the markets vertically as well as horizontally, and so it’ll be a bigger focus on Africa. The market is relatively small compared to South Africa, but small drops make a river. [Some African countries] are now starting to get legislation – mandatory specifications for armoured vehicles. And I think we’ve got a unique solution for Europe, but I don’t think I’m going to be doing Europe anytime soon. I mean we’ve got quite a big market here.”

For more information on protective steel used for armoured vehicles download the whitepaper below.

Ramor protection steels: the toughest in the world

Whether for the construction of a sensitive building, or the design and manufacture of defensive vehicles, you need a steel that can meet and exceed protection parameters. SSAB has been at the forefront of protection steel research, development, and manufacturing for more than 50 years. One of the toughest products is the Ramor® range of steels with a single purpose: to protect human life. Its technical specifications and performance lead the market, and it is a favoured material used by non-military and military armoured vehicle and buildings like banks and embassies. This factsheet provides details of Ramor® 500 and Ramor® 600, and some real-world applications.
By Armox