French hotel group Accor will open three hotel brands in India by the end of 2011. The three brands – Formule 1, Sofitel and Pullman – will take the total number of Accor brands in the country to six. The company already has Ibis, Mercure and Novotel brands in India.
Thailand-based Centara Hotels & Resorts is to open the first overseas property of its Centra value brand in Bali, Indonesia, in November 2011. The 90-room Centra Taum Resort Bali, which is being developed at a cost of $20m, will be operated by Centara under a management contract.
Hilton Hotels & Resorts has opened its first property in the Chinese city of Guangzhou. The 504-room Hilton Guangzhou Tianhe, which is owned by a subsidiary of Talent Property Group, is the first of two Hilton properties scheduled to open in Guangzhou this month. The hote
French hotel group Accor posted a net profit of €41m for the first half of 2011 compared with a loss of €15m during the same period last year. Accor's consolidated revenue for the period increased by 4.4% to €2.97bn on a reported basis and 5.8% like-for-like compared w
The Middle East / Africa hotel industry reported a 1.2% decrease in occupancy to 60% during July 2011, according to data by STR Global. The region recorded a 1% decline in its average daily rate (ADR) and a 2.2% fall in revenue per available room (revPAR). Dubai, Jeddah and Ab
Carlson will open a 125-room Radisson Blu hotel in Dehradun, India, in 2014. The new $25m, six-storey Radisson Blu Hotel Dehradun will be the Carlson Group's 89th property in India. Construction is expected to begin in September this year with an opening date scheduled for th 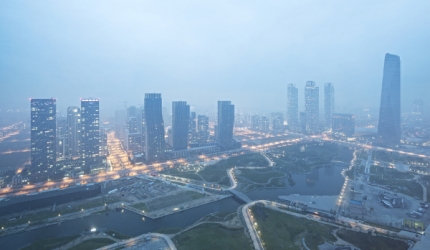 Songdo International Business District (Songdo IBD) is a new city in Incheon, South Korea. It is the first sustainable city in the world and first LEED certified city in Korea. It is the largest project to be included in the LEED pilot programme outside the US.

The Songdo IBD concept was developed by Gale International along with POSCO E&C. The project is estimated to require an investment of $35bn.

Songdo city will make South Korea the new business hub for national and international companies. Construction of the city began in 2004 and is expected to be completed by 2017. The first phase of the project opened in August 2009. Upon full completion, the city will accommodate 65,000 residents and 300,000 commuters.

Facilities and master plan of the Songdo IBD

Songdo IBD is being constructed on 1,500 acres of landfill in South Korea along Incheon waterfront. It is located approximately 40 miles (64.3km) west of Seoul and 7 miles (11.2km) from Incheon International airport. The city is given free economic zone status.

The city will have commercial, cultural and recreational facilities. Few of them include Chadwick International School, hospital, commercial office complex, and residential units. It will also have a convention centre named Convensia, Incheon Arts Center, and an ecotarium which will accommodate cultural gatherings.

The master plan includes 600 acres of open space to encourage gatherings and interaction among the people. Central Park is located at the heart of the city. At one end of the park is Northeast Asia Trade Tower (NEATT), the tallest tower in the country. The 68 storey mixed use office tower is located next to 1.2m ft² convention centre. In between the buildings is civic space.

Architecture and inspiration for the Songdo IBD

The IBD’s architecture is influenced by several cities in the world. The 100 acre Central Park draws inspiration from New York City Central Park where as pocket parks are designed resembling the ones in Savannah. A Venice style canal system is located inside the park.

The city aims to provide high quality of life to both locals and tourists. Residents can choose to live in apartments or garden residences. The buildings will have about four to 65 stories with approximately 25,000 new housing units.

Sustainability of the green city in Songdo

Sustainability will be the heart of the LEED certified city. LEED NC and / or LEED CS along with Korean Green Building Certification System will be used on selected portions of the plan. Land development agreements will include codes to construct many of the buildings as per LEED standards.

The certifications will ensure that design, construction and development of the city is sustainable. The city will serve as an example for a new, unique and sustainable development in the world.

Approximately 13.7m ft² of space in the city is LEED certified. The certified buildings are the first timers either in Korea or Asia. The buildings are Convensia, Residential Tower in Central Park I, Sheraton hotel and Chadwick International School. In June 2012, the office complex International Business Square in the Songdo IBD gained LEED gold certification.

Design methods will follow clean technologies that will use recycled and local materials, ensure energy savings, are energy efficient and generate clean power.

Masdar City is a 1,483-acre green city that is currently under construction in Masdar, Abu Dhabi, UAE. It will be the world’s first zero carbon, zero waste city powered by renewable energy.

Energy efficient traffic lights, motors and pumps will be installed throughout the city. A power generation plant run by natural gas will supply clean power and water heating facility to the city. Recycled water and storm water runoff will be used to achieve water savings. The project will be built surpassing the ASHRAE (American Society of Heating, Refrigerating and Air Conditioning Engineers) standards.

The city will be operated and designed based on the rule to use recycled and green products. Wet and dry waste will be collected a centralised pneumatic system. About 75% of the construction waste will be recycled. Recycled and local materials will be used in majority. The buildings will be constructed using low volatile organic compound (VOC) materials. Fly ash cement will replace about 20% of ordinary cement used for the construction.

The pedestrian friendly project will be designed with sidewalks and bike routes besides the streets to promote walking and interaction activities.

Parking will be underground to facilitate safe and free walking activities in open space and reduce heat. Charging stations will be provided at parking places in order to achieve low emissions.

Key players involved in the project

City of Incheon, in June 2001, appointed NSIC, a joint venture of Gale International and POSCO E&C, to develop the Songdo IBD project. Cisco, 3M Worldwide and United technologies are the development partners.