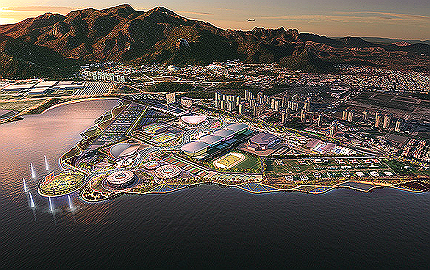 Rio 2016 Olympic Park, situated in Barra de Tijuca, south-west of Rio de Janeiro in Brazil, will be where the main sports cluster of the 2016 Olympic and Paralympic Games is located. It will host several sporting events and offer meeting places for athletes, visitors and sponsors during the Games.

The park is centrally located from the other three city venues hosting the Olympics – Copacabana, Maracanã and Deodoro. Rio de Janeiro will also host the Brazil Soccer World Cup 2014.

Both the sporting events are expected to create 12,265 infrastructure projects in the country.

"All the permanent buildings will be built adjacent to the existing Maria Lenk Aquatic Centre, Rio Arena and Barra Velodrome."

AECOM won the international architectural competition, General Urban Plan of the Rio 2016 Olympic Park Competition, in August 2011, to design the park. Organised by the Institute of Architects of Brazil (IAB) and the Rio Municipal Olympic Company, the competition was the first of its kind in Brazil and had received 59 proposals from 18 countries.

Gensler and Associates International stood second in the competition, while the third was Risco. It also included three other honourable mentions.

The city will also conduct competitions for the design of individual venues. Hanse Golf Course Design was chosen in March 2012 to design a new golf venue at the Reserva de Marapendi in Barra da Tijuca, also for the Games.

AECOM formally received the design contract in October 2011. The firm has also designed the Olympic Park for London 2012. The estimated budget for the urbanisation of the Olympic Park development is about BRL590m ($309.4m).

Collaborators working with AECOM on the Rio 2016 Olympic Park

Key collaborators of AECOM in the competition were DG Architecture, Brazil, Wilkinson Eyre Architects, Pujol Barcelona Architects and IMG Sports and Expedition. The final design on the plans and venues is currently underway by AECOM teams in Rio de Janeiro and London.

The development is planned in three phases on the allocated 120ha site. The first phase is its development for the Olympic Games, second phase emphasises on the site’s transition stage of about seven years, while the third phase is the social, environmental sustainability and economic feasibility during the legacy mode.

The Olympic Park will be built on 120ha (or 1,180,000 square metres or 300-acres) of land. The triangular-shaped site, overlooking the Jacarepagua lagoon, has water on two sides and mountains in the background. It will include both permanent and temporary buildings.

Permanent facilities will include a science and sports laboratory, a medical centre, athletes’ lodgings, reception, an Olympic Hall, athletics track and tennis centre. A Main Press Centre (MPC) and an International Broadcasting Centre (IBC), capable of handling 20,000 journalists, along with a hotel, will also be built at the site.

The Brazilian Government is to spend R$7.5bn ($4.24bn) on revamping and modernising its airports ahead of the FIFA World Cup in 2014.

All the permanent buildings will be built adjacent to the existing Maria Lenk Aquatic Centre, Rio Arena and Barra Velodrome. Some of the other venues developed for 2007 Rio Pan American Games will also be used for the Olympic Games. In the Legacy mode, all these permanent buildings will be renamed to Olympic Training Center (TOC) and will be used for training purposes.

The temporary structures will include a spectator square, for 15,000 visitors, a hockey centre, sponsors villas, main tennis and warm up courts, an aquatic centre, parking spaces and a lounge for competition exhibitions. They will be removed after the Games.

The urban master plan includes public spaces, accessibility, public transportation infrastructure, separate access for athletes and public, environmental conservation, viability and unique access for parking for the two modes. About 60% of the area will be available for future real estate developments. 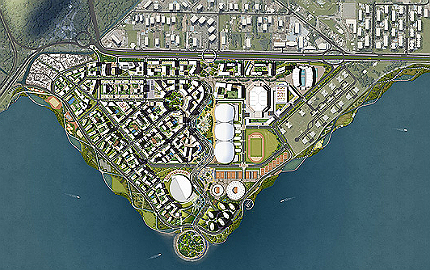 The master plan puts emphasise on commercial, residential and leisure developments in two modes – the Olympic Games mode and the Legacy mode which comes after.

The legacy plan emphasises on the social, economic and environmental sustainability of the site after the games. It will enhance the district with housing, commercial enterprises, sport facilities, leisure spaces and provide employment opportunities.

The site will become a global hub for sporting excellence. A new Atlantica Forest park will also be developed.

The plan will include environmental preservation, priority to soil permeability, security and sustainable technologies, ecological restoration of the lagoon, integration of the planned municipal projects with the surroundings and universal accessibility.

The new urban developments and venues are expected to create a benchmark for sustainability and urban planning around the city.

Elisabeth Fischer reports on the expansion process ahead of the 2014 World Cup and 2016 Olympic Games, which has not only triggered the privatisation of some of the country’s airports, but also the clean-up of its jet graveyards.

Are cheaper, temporary sporting venues the key to an economical and sustainable 2012 Olympic Games?

In preparation for two major sporting events, Brazil is experiencing a major construction boom – but not without dangers.