The Philadelphia Marriott Downtown in Philadelphia, US, has completed the $17m renovation of its meeting areas. The hotel offers 92,000ft² of meeting space, 72 meeting rooms and a 34,300ft² ballroom for up to 4,500 people.
Windsor Atlantica, Rio de Janeiro's newly renovated hotel, has signed a deal with Utell Hotels & Resorts for global representation and marketing, and with Pegasus Solutions for global commission processing. The 545-room hotel is Utell's 18th Rio de Janeiro property and becomes the
India-based St Laurn Hotels and Resorts is to invest Rs30bn ($669m) in opening 15 new hotels across India by 2015. The company will open a third of the hotels in the state of Gujarat with an investment of Rs10bn ($223m). St Laurn director of operations Sunil Kariyaa told Th
US-based hotel management and services company Marshall Hotels & Resorts has signed two management contracts in the Caribbean. Under the contracts, Marshall will manage the 160-room Windward Passage Hotel in Charlotte Amalie, St Thomas, US Virgin Islands. Guestroom renov
Marriott Hotels & Resorts will open its 1,003-room Austin Marriott Marquis hotel in Austin, Texas, US, in 2015. The hotel, which is scheduled to break ground in mid-2012, will offer 110,000ft² of flexible meeting space, multiple food and beverage venues, 374 underground parking 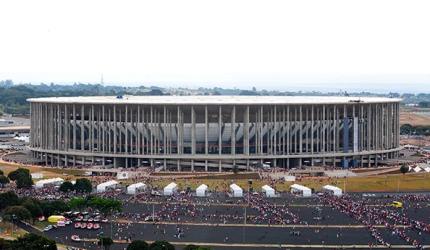 The old stadium was completely demolished to erect the R$ 1.01bn ($476.2m) new stadium with an expanded seating capacity of more than 72,800. The construction of the new stadium took more than two years to complete, using around 15,000 workers.

"Mane Garrincha Stadium will host a number of matches at the 2014 FIFA World Cup."

Novacap (Urbanization Company of New Capital of Brazil) is the owner of the new stadium, while the Federal District Development Agency (Terracap) provided resources for the construction.

Mane Garrincha Stadium will host a number of matches at the 2014 FIFA World Cup, as well as at Rio Olympic Games 2016. The stadium has also hosted matches at FIFA Confederations Cup 2013.

Structure and design of the new Mane Garrincha Stadium

The 72,800-seater stadium is an eight-storey structure divided into four sections. It is 46m tall and has a built-up area of 218,800m². The front rows of the stadium are just 7.5m away from the football pitch, which has been lowered by 4.8m for better visibility. The stadium lawn is 105m in length and 68m in width.

The circular-shaped stadium has been built combining the ‘spoked wheel’ and ‘stressed ribbon’ structural principles.

The stadium’s facade draws inspiration from the Brazilian architect Oscar Niemeyer who designed most of the national monuments in Brasilia. The facade comprises of 228 pillars surrounding the stadium. The pillars, 1.2m in diameter and 48m in height, sustain the concrete compression ring supporting the roof structure of the stadium.

The stadium also features a 618,000m² promenade surrounding it, while the crowd flow is facilitated by 50 ramps, four escalators, 60 stairs and 20 lifts.

Construction of the new Brazilian stadium

The construction of the new stadium started after the old Mane Garrincha Stadium was fully dismantled by May 2011. The lower grandstand was completed in December 2011.

The 288 pillars surrounding the stadium were built by July 2012.

The Maracana is an open-air stadium in Rio De Janeiro, Brazil. Named after the Maracana region, the stadium was built in 1950. It has hosted numerous football matches, including the final of the 1950 FIFA World Cup.

The construction of compression ring joining the pillars was completed in September 2012. The compressor ring with a diameter of 308m is 22m wide and 1km in circumference. It was formed by two slabs and 5m high walls.

The roof cables were fitted in the compressing ring through 48 base plates. A total of 48 permanent supporting cables, each with a diameter of 10cm, were lifted with the use of hydraulic jacks placed in the ring. The cables were then attached to the base plates.

Apart from hosting football matches, the stadium with retractable seats, can be used as a multi-use venue for mega events such as concerts, conferences and meetings.

The stadium has 465 reflectors and 6 TV booths. Other facilities in the building complex include four changing rooms, 74 hospitality boxes, 276 toilets, 40 bars, two restaurants and 14 snack bars.

The new stadium reused the materials removed from the old stadium either directly or through recycling.

The stadium features necessary facilities for the mobility of people with disabilities. It includes the wheel chair manoeuvre areas and the provision for their easy access to the ramps and lifts at the stadium.

The other sustainable features of the stadium include a rainwater harvesting and reuse system, a 2.5MW solar photovoltaic (PV) system with the solar panels fitted on the perimeter of the stadium’s roof, and the use of LED lighting system.

The stadium is seeking Leadership in Energy and Environmental Design (LEED) Platinum status from the US Green Building Council. If certified, Mane Garrincha will be the first football stadium to attain this status.

Castro Mello in association with German, Marg und Partner (GMP) provided the design of the stadium.

"The circular-shaped stadium has been built combining the ‘spoked wheel’ and ‘stressed ribbon’ structural principles."

A consortium comprised of Andrade Gutierrez and Via Engenharia was awarded the contract for constructing the stadium in July 2010.

The lighting design for the stadium was provided by Conceptlicht.

Cadmus in partnership with EcoArenas is providing the LEED consulting and certification management services for the project.