Palace Resorts has announced plans to open a property in Jamaica, the group’s first property outside of Mexico.
The Rezidor Hotel Group has signed 11 new projects in the second quarter of 2014, in a bid to expand its global footprint.
Starwood Hotels & Resorts Worldwide is set to open its fifth Westin brand hotel in the greater Houston region of Texas in collaboration with The Howard Hughes Corporation.
Ashford Hospitality Trust, Texas-based real estate investment trust (REIT), has entered into a definitive agreement to acquire the Fremont Marriott Silicon Valley hotel in a $37.5m debt-financed deal. 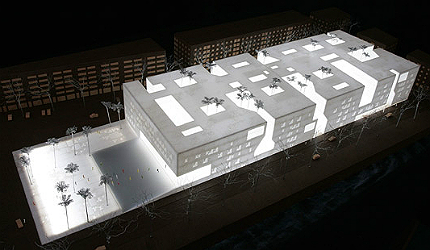 Spain’s rapid housing boom has created quite a few anonymous areas of drab concrete that the architects of the Cordoba courthouse are hoping to alleviate. The whitewashed city-within-a-city complex will be situated in Calle Isla Mallorca, located at the edge of the city in a residential district shaded by nearby mountains. The client for the project is Consejería de Justicia y Administración Pública, Sevilla.

The commission was awarded to architect / director Francine Houben of Mecanoo architects, Netherlands, as part of the New Palace of Justice competition in March 2006, at a ceremony attended by the mayor of Cordoba, the city council, the consejeria de justicia and Spanish newspapers.

The design phase was completed in 2008. Grupo Ayesa, one of Spain’s major engineering companies, was contracted for providing structural engineering and consultant services for acoustics and installations.

A team of about ten people worked with technical consultants for installations, structure and fire regulations. After seven years of delay, the contract for the construction of the courthouse was awarded to a consortium of Detea, Corviam Construcción, Isolux Corsán and Copcisa Industrial in November 2011.

The project will be realised as a public private partnership (PPP) between the consortium and the Andalusian Government. The project is estimated to cost €345m.

"In a reference to the old city of Cordoba, the façade is slightly perforated in the manner of traditional architecture and the fine filigree carvings help to diffuse light in the corridors and absorb heat."

Construction of the City of Justice in Cordoba will begin on a Greenfield site of 12,112 square metres in the summer of 2012. It is expected to take 34 months to complete.

The building will cover a space of 37,747 square metres and will bring a new extension to the city. There are 2,000 different rooms, including public function rooms spread out across the first two floors.

All the functions related to justice are in one building as an aid to security. There will be 26 courtrooms, a forensic institute, public facilities, a ceremonial room for weddings, offices, a café, a car park and a prison on the lower floors.

The main materials are concrete, one of the most common materials for Spanish buildings, and steel. The architects are currently investigating the use of prefabricated panels which will carry some decorations and relief. Cordoba is one of the warmest cities in Spain so the architecture has to create a cool environment.

There are two possibilities with the panels, one is glass with a print, the other is a perforated metal glaze to bring shadow to the façade.

The structure also features cantilevers made from concrete and steel. There will be a large square in front of the building to magnify the entrance.

Andalusian inspiration for layout and architecture

The layout continues the tradition of the way old Andalusian cities were designed, with terraced areas as a focal point and a main inspiration. Patios between the rooms and on the roof provide spaces for light and cooler air to circulate.

"The project will be realised as a public private partnership (PPP) between the consortium and the Andalusian Government."

Plant pots are dotted around the upper and lower patios and fountains are placed centrally.

The building is raised on a plinth and the entrance is via a large, sloping square, with the more communal function rooms, such as courtrooms, wedding rooms and restaurants, on the lower floors and the more inaccessible rooms, such as secured offices, on higher floors. The interiors are painted white, with high ceilings and dark floors.

In a reference to the old city of Cordoba, the façade is slightly perforated in the manner of traditional architecture and the fine filigree carvings help to diffuse light in the corridors and absorb heat.

The perforated walls are continued throughout the interior and several façades are decorated with coloured ceramic panels.

Mecanoo is also working on developing an area of parkland near the site, in front of the town hall, which currently has two trees and a plot of grass. Building in Spain is quite a different experience to the Netherlands, say the architects.

Mecanoo is an international team of about 90 architects, designers, architectural technicians, urban planners and landscape architects. The company had won the international competition in 2005 for La Llotja Theatre and Conference Centre in Lleida, which was completed in March 2010.

Sustainability of the Spanish project

CO2 Engineering Consultants has been contracted to provide a sustainable framework for the project to make it more energy efficient. The project will be built using recycled materials. A natural cross ventilation to the building will be provided by using CFD calculation method.

Internal courtyards and heat recovery units will be included in the design to allow further ventilation. Advance facade designs included in the plan will provide solar protection to the building.

The structure will be super insulated and glazing will be done to provide thermal comfort. Other facilities, such as chilled beams, high efficient cooling towers, water source heat pumps and photo voltaic structures, will be included in the building.