Fairmont Hotels & Resorts has added Moscow's Pekin Hotel to its portfolio.
Mövenpick Hotels & Resorts' Mövenpick Resort & Spa Dead Sea has been ranked as one of the top five resorts in the Middle East in the Condé Nast Traveler Reader's Choice Awards.
Hyatt Hotels has launched its Andaz brand in Xintiandi, Shanghai, China.
US-based private investment firm Westwind Investors has sold two Hampton Inn hotels in the US states of North and South Carolina to Terrapin Investments. 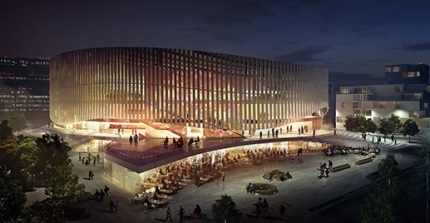 A design competition was held to select the design for the arena. A total of 41 teams participated, of which five teams qualified. Three design teams were selected for the final round. In June 2012, the design team consisting of 3XN, HKS architects, Arup, ME Engineers and Planit won the first prize in the competition.

The arena is scheduled for completion by the end of 2015.

Master plan of the sports arena in Copenhagen

The arena is expected to establish Copenhagen as an attractive business, cultural and tourist destination.

Copenhagen Arena is part of a new urban district development being undertaken by the City of Copenhagen, City & Port Development and Realdania. The development also includes a new ice rink and schools. The aim of the development is to enhance sports, culture and city life while boosting economic growth in Denmark.

City & Port Development and Realdania will have joint ownership of the arena. They will be responsible for overseeing the design and construction. Live Nation will be the operator.

Along with the new arena, Malmö Arena and other facilities, the Øresund Region is expected to be established as a cultural and entertainment destination.

The arena is situated near an existing shopping centre and international offices and hotels. It is expected to establish Copenhagen as an attractive business, cultural and tourist destination. It will be promoted nationally and internationally to attract large, international-level events.

The architects have created a distinct, Nordic design for the Copenhagen Arena.

Financing of the Copenhagen Arena

Additional loans will also be needed for the construction of the arena.

Design and structural details of the sports and entertainment complex

Downtown Arena is a new multi-use indoor arena being planned in Edmonton, Alberta.

The architects have created a distinct, Nordic design for the Copenhagen Arena. The structure is divided into a plinth, or unique podium, and a top. The podium links the arena with the neighbourhood. It includes various spaces such as small plazas and gathering areas which can be used for recreational purposes.

The podium will help in absorbing the movement of spectators and also promote the use of public spaces. The top of the arena is semi-transparent and lined with terracotta fins.

The Copenhagen Arena is designed to be extremely flexible to function as a multi-use facility. It will have a floor space of 35,000m2 (376,737ft2) along with a foyer area, cafés, restaurants and bars. Service areas for performers and athletes are also provided in the facility.

The arena will have a capacity of up to 12,500 for sports events and 15,000 for music and entertainment events. Audience will be seated on three sides of the stage or court. All the four sides of the arena can be used, and a flexible design will allow it to be scaled down for smaller events.

The arena’s terracotta and glass façade

Copenhagen Arena’s semi-transparent facade surrounds the podium and offers views of the interiors to the public. Terracotta fins line the facade in a wave-like circular pattern, giving a warm, golden colour and elegant appearance to the facility.

Veltins Arena, also known as the Schalke Arena, is a multi-purpose stadium located in the Erle borough, north of Gelsenkirchen, Germany.

Glass is placed between the terracotta fins creating an open and accessible appearance. The glass also enables natural light to enter the foyer areas.

Contractors involved in the building of Copenhagen Arena

AECOM served as one of the consultants for the project, with IPW providing financial planning services. COWI has been appointed as the project manager and Planit will provide landscaping services.