The Statue of Liberty has stood as a symbol of freedom and democracy since its dedication in 1886, but today, an even stronger sign of resilience towers over the US, the One World Trade Center. On 10 May, 2013, a crane lifted the last piece of the silver spire on top of the New York-based building, which now stands at 1,776 feet, a fitting reference to the year America signed the Declaration of Independence. 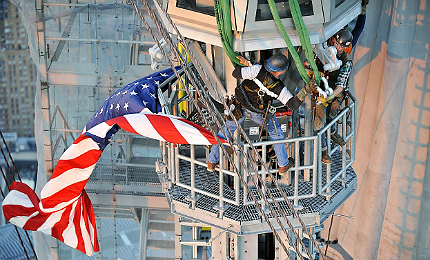 The 18-piece spire was designed in collaboration with artist Kenneth Snelson and shipped from Canada.

The completion of the 18-piece spire makes One WTC the tallest building in the Western hemisphere and marks a key milestone in an effort to replace the twin towers destroyed in the terrorist attacks of 9/11.

Weighed down: problems encountered by the project

But in an attempt to build a beacon of hope, developers have been plagued by a series of delays, disputes and cost overruns, which put the future of the skyscraper and its surrounding buildings in doubt. 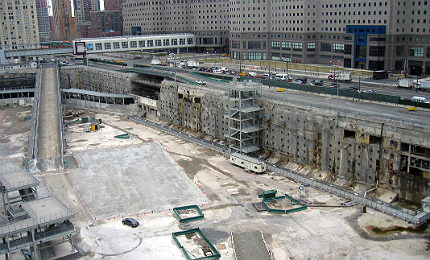 The construction of the foundation for One WTC was a significant engineering feat because it was constructed adjacent to and around the PATH, an operating railroad system.

A ground breaking ceremony took place at the One WTC site in Lower Manhattan on July 4, 2004, but further construction work suffered years of setbacks due to a number of disputes over ownership, design, financing and security.

A replacement for the original World Trade Center Complex has been on the cards for almost 11 years. In February 2003, architect Daniel Libeskind was selected in an open competition to design the ground zero project.

But his concepts went through several revisions and were largely discarded by May 2005, soon after Skidmore Owings and Merrill’s David Childs joined the project at the request of top New York City real estate developer Larry Silverstein, who had won a 99-year lease for the World Trade Center with a $3.2bn bid just weeks before the twin towers were razed to the ground. 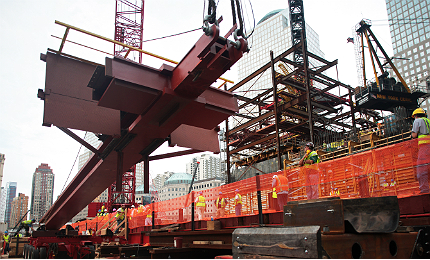 In a candid book, Breaking Ground, published in 2004, Libeskind recounts his "forced marriage" to Childs, and portrays the SOM architect as overbearing, determined to eliminate Libeskind’s original design.

In the early plan, the tower was a twisting, angular glass structure with a spire that reached out on one side to mirror the Statue of Liberty’s arm. He visualised aerial gardens, wind mills and public plazas which would accompany the building and an an elevated promenade circling the structure.

But much of the design was tailored to meet Silverstein’s "uncompromising demands for yet more office space without regard for the public plazas, parks, memorials and streets of the master plan", Libeskind recalled in this book. 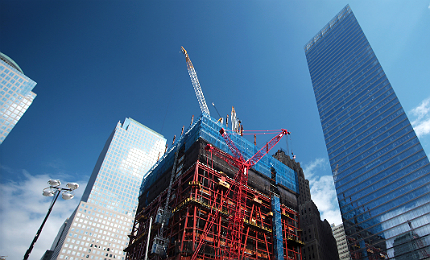 The construction of the One WTC was delayed due to disputes between owners and developers.

One WTC’s final design is an octagonal structure which tapers as it rises. Childs planned to clad the building in prismatic glass, but preliminary testing proved this material easily shattered into large and dangerous shards. Instead, the structure is being covered in more than 4,000 13-foot glass fins positioned at varying angles. In combination with reflective coating, they refract and transmit light to create a shimmering surface.

Initial plans to enclose the spire, designed in collaboration with artist Kenneth Snelson, with a protective shell were also scrapped after it was claimed it would be too expensive and dangerous to maintain. 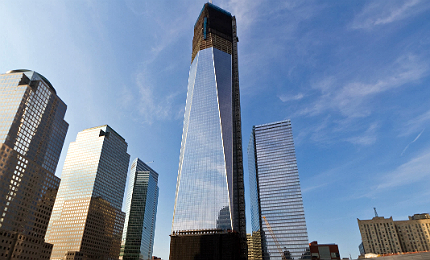 The tower is clad in 4,000 glass fins positioned at varying angles.

In 2006, Silverstein came to blows with the Port Authority of New York and New Jersey, the transportation agency that built the 110-storey twin towers in the early 1970s.

The two parties had failed to reach an agreement for the financial plan for its 16-acre World Trade Center complex, which also includes four smaller commercial buildings, a transportation hub, 352,000 square feet of retail space and a 9/11 Memorial Museum.

The Port Authority had been pressing Silverstein for proof that he has the necessary financial resources for One WTC, then known as Freedom Tower, and proposed taking over the construction of the structure. 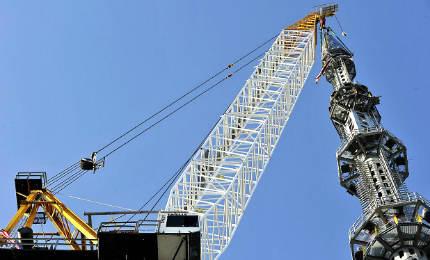 The final piece of the spire was installed on 10 May, 2013, making the One WTC the tallest building in the Western Hemisphere.

In April 2006, Silverstein agreed to yield its rights over the One WTC and instead retain control of three buildings planned along the site’s eastern edge, included a 950ft tower designed by British architect Norman Foster.

Two years later, an arbitration panel ruled that the Port Authority did not fully excavate and prepare the two sites for Silverstein Properties, violating the terms of the agreement.

As the completion date for One WTC got pushed further ahead, the construction bill soared. Originally budgeted at $2bn, costs are now estimated to be $3.8bn. 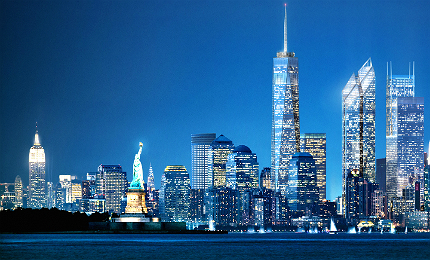 With the last of the major disputes resolved, One WTC has finally been topped out and 55% of the building has been leased to publisher Condé Nast, the federal government; China Center New York; and the Legends Hospitality Group, which manages the observation deck.

At last, rows and squabbles have been put into perspective by the enormity of work that went into building such a symbolic building.

Speaking on the day the structure’s spire was installed, New Jersey Governor Chris Christie said: "Today’s achievement is a fitting tribute to the sacrifices made by so many brave and innocent souls nearly 12 years ago."

The tower’s interior construction is expected to be completed later this year, with an official opening scheduled for 2014.

Over the last few years, brands have increasingly recognised the potential of creating their own signature hotel accommodation.

Timber in the city: the new cosmopolitan construction material of choice

Thanks to its glowing green credentials, the use of timber for urban housing is experiencing a new renaissance, especially in the UK.